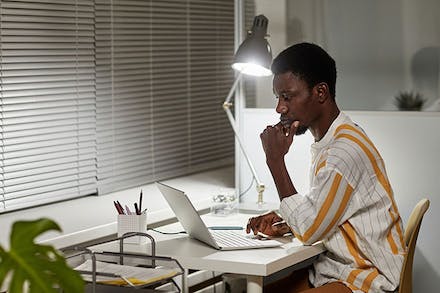 At night, when a lot of people are online at the same time, the network can be overwhelmed. This is like rush hour traffic—too many cars trying to get to the same places simultaneously. Two types of network congestion can contribute to this slowdown: local network congestion in your home and wide area network (WAN) congestion on your internet service provider’s (ISP’s) network.

In most cases, the congestion on the ISP’s side is not as much of a problem as it used to be, so the slowdown is more likely to be caused by an issue within your home or something unrelated to congestion.

2 Causes of Slow Internet at Night

Here are two possible causes of your nighttime internet slowdowns:

The internet is flooded with activity as the day draws to a close. From 6:00 p.m. to 11:00 p.m., people log in to watch movies, play online games, communicate with friends, and do whatever else they want. During this time, the internet is its busiest, as a high volume of users can strain the available bandwidth.

Network congestion is when an internet network is overwhelmed with more web traffic than it can handle, causing the network to slow down. This can happen due to too much web traffic on the network at one time or limited resources available in the area. It can occur on both home networks and large providers.

How to Avoid Slow Internet at Night

These days, it’s not as difficult to dodge those dreaded delays during peak times. Internet service providers have made great strides in upgrading their networks and using more sophisticated technology to deal with the high demands of the internet. However, you can still take a few steps to avoid being slowed down in the evenings.

If your internet is running slow during peak hours, it might be due to your ISP’s network getting congested. Upgrading your plan to a faster one may help alleviate the issue, giving you greater bandwidth. It may be worth a try, as there’s no real way to know if it will help until you do it.

Network congestion is a problem that affects all types of internet, but it is less frequent and less severe on networks using a cable and fiber-optic cables. This is because these cables can handle more data than the phone cables used for DSL or satellites used by satellite ISPs.

If you have a lot of people using the internet simultaneously in your house, it can slow down your local network. To avoid this, try to stagger the times people use the internet for activities requiring high bandwidth. Also, some routers can be configured to prioritize certain devices or types of web traffic so that the most important online activities are given top priority and run smoothly.

There are several potential causes of your internet slowing down at night. To ensure you can get the most out of your connection, it is important to identify the source of the problem. By taking the time to troubleshoot and make necessary adjustments, you can often fix your internet connection and get back to enjoying your online activities.

Fetch Wireless delivers the versatility that other technologies can’t! Whether you want to stream your favorite movies and TV shows, browse the web and social media, or even play competitive online games, you’ll be able to do it anywhere in the US with a 25 Mbps average download speed! Powered by the same network towers that provide signals to your phone, we’ve partnered with the largest 4G LTE carriers to deliver Internet to even the most rural locations. If you’re looking for high-speed wireless internet that works even in rural areas, Fetch Wireless has you covered! Give us a call today to check availability!